Our paper “Making USB Great Again with USBFILTER” has been accepted by USENIX Security’16. This post provides a summary of usbfilter. For details, please read the damn paper or download the presentation video/slides from USENIX website. I will head to TX next week, and see you there~

0. Why USB is not great anymore?

We CANNOT trust a USB device from its appearance anymore. One of the typical BadUSB attacks is a USB drive with a keyboard functionality to inject malicious script into the host machine once plugged into. The root cause of the problem is that (almost) everyone can change the USB device firmware to add new functionalities as desired. And people would just plug in the USB flash drives found somewhere for curiorsities (“Users Really Do Plug in USB Drives They Find” Oakland’16). Even worse, this also puts enterprise infrastructure in danger – however powerful the networking firewall would be, a suspecious USB device used by an employee can turn everything into vain. As a result, enterprise settings usually forbid the usage the external USB devices except the original keyboards/mouses. For most normal users, we just ignore these threats or try to plug in unknown USB devices into someone else’s machines…(this is how friendship breaks). Note that cellphones are also USB devices, and what would you do when someone needs to charge his/her phone using your machine?

The more we play with USB, the more we realize that it is just another transport protocol for USB devices, like TCP/IP for networking devices. Moreover, it is USB packets trasmitted between the USB host controller and devices. Inspired by the netfilter in the Linux kernel, we then made up something like below, and all we need is to make it work. 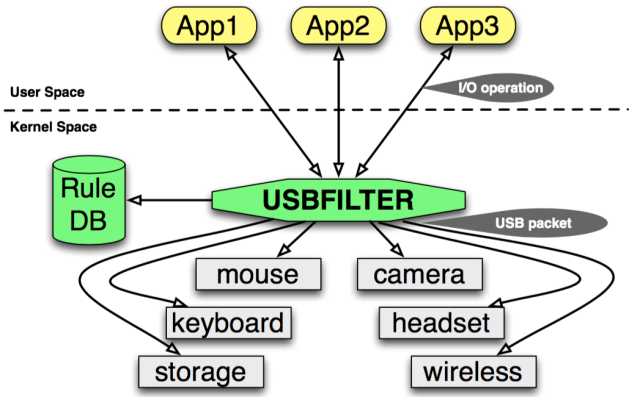 2. The design and implementation of usbfilter

One of the key features of usbfilter is its ability to trace the USB packet back to its originating process. This is non trivial. For instance, because of the generic block layer and the I/O scheduler within the kernel, all USB packets operating (read/write) the USB storage devices are handled by the usb-storage kernel thread for performance considerations. Similarly, USB networking devices usually have their own Rx/Tx queue to buffer skb (IP packet) before it is encapulated by the USB stack in their drivers. Because usbfilter works at the lowest level of the USB abstraction in the kernel, the pid it can sees usually is either from a kernel thread (device drivers) or an IRQ context (null). As one can imagine, we hacked into different subsystems of the kernel, and saved the originating pid into the urb (USB packet) before it was lost due to asynchronized I/O. Once we fix that, we have a more concrete picture of usbfilter: 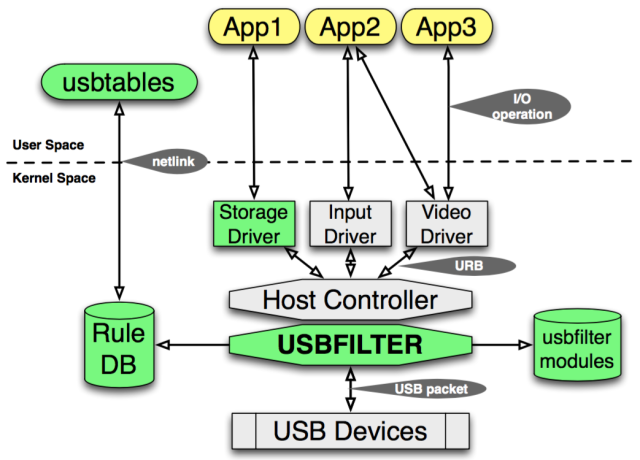 Now all we need to do is to implement a user-space tool, which is called usbtables, to communicate with the usbfilter component in the kernel, and enforce rules/policies pushed from the user-space. To make sure no conflictness/contradictiveness within rules, usbtables also has an internal Prolog engine to reason about each new rule before it is pushed into the kernel.

3. So what can usbfilter do?

Here is the fun part. We list a bunch of cool use cases here. For a complete list of case studies, please refer to our paper. In general, just like iptables, with the help of usbtables, users can write rules to regulate the functionalities of USB devices.

A Logitech webcam C310, which can only by used by Skype

A USB port dedicated for charging

If you look at the usbfilter architecture figure again, you will notice a thing called usbfilter modules or Linux usbfilter modules (LUM). This is another powerful feature of usbfilter. Just like netfilter, usbfilter enables kernel developers to write kernel modules to look into and play with the USB packet as wished, plug in them into the usbfilter, and enable new rules using these kernel modules. Check out the example LUM in the code repo to detect the SCSI write command within the USB packet (https://github.com/daveti/usbfilter/blob/master/lum/lum_block_scsi_write.c). With the help of this LUM, one can write rules to stop data exfiltration from the host machine to a Kingston USB flash drive for user 1001:

With default to block any SCSI write into any USB storage devices, a whitelist can help permit a limited number of trusted devices in use while preventing data exfiltration when an unknown USB storage device is plugged into.

There is still a long way before the usbfilter can be officially accepted by the mainline. Applications may hang forever waiting for the response USB packet, whose request USB packet has been filtered by usbfilter, though this could be an implementation issue of applications. Some USB devices can also be stale in the kernel even if they have been unplugged already, if the USB packet used to release the resource is also filtered. Even though usbfilter has introduced a minimum overhead, using BPF may be mandatory for it to be accepted by the upstream.

To download the full paper, please go to my publication page. The complete usbfilter implementation, including the usbfilter kernel for Ubuntu 14.04 LTS, the user-space tool usbtables, and the example LUM to block writings into USB storage devices are available on my github: https://github.com/daveti/usbfilter. Any questions, please go ahead to open an issue in the code repo, and I will try my best to answer it in time.

This site uses Akismet to reduce spam. Learn how your comment data is processed.